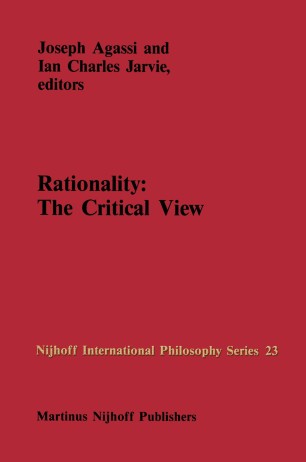 In our papers on the rationality of magic, we distinghuished, for purposes of analysis, three levels of rationality. First and lowest (rationalitYl) the goal­ directed action of an agent with given aims and circumstances, where among his circumstances we included his knowledge and opinions. On this level the magician's treatment of illness by incantation is as rational as any traditional doctor's blood-letting or any modern one's use of anti-biotics. At the second level (rationalitY2) we add the element of rational thinking or thinking which obeys some set of explicit rules, a level which is not found in magic in general, though it is sometimes given to specific details of magical thinking within the magical thought-system. It was the late Sir Edward E. Evans-Pritchard who observed that when considering magic in detail the magician may be as consistent or critical as anyone else; but when considering magic in general, or any system of thought in general, the magician could not be critical or even comprehend the criticism. Evans-Pritchard went even further: he was sceptical as to whether it could be done in a truly consistent manner: one cannot be critical of one's own system, he thought. On this level (rationalitY2) of discussion we have explained (earlier) why we prefer to wed Evans­ Pritchard's view of the magician's capacity for piece-meal rationality to Sir James Frazer's view that magic in general is pseudo-rational because it lacks standards of rational thinking.