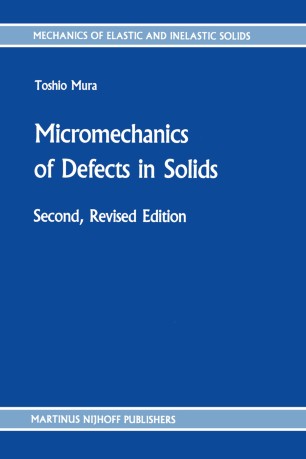 Micromechanics of defects in solids

Part of the Mechanics of Elastic and Inelastic Solids book series (MEIS, volume 3)

This book stems from a course on Micromechanics that I started about fifteen years ago at Northwestern University. At that time, micromechanics was a rather unfamiliar subject. Although I repeated the course every year, I was never convinced that my notes have quite developed into a final manuscript because new topics emerged constantly requiring revisions, and additions. I finally came to realize that if this is continued, then I will never complete the book to my total satisfaction. Meanwhile, T. Mori and I had coauthored a book in Japanese, entitled Micromechanics, published by Baifu-kan, Tokyo, in 1975. It received an extremely favorable response from students and re­ searchers in Japan. This encouraged me to go ahead and publish my course notes in their latest version, as this book, which contains further development of the subject and is more comprehensive than the one published in Japanese. Micromechanics encompasses mechanics related to microstructures of materials. The method employed is a continuum theory of elasticity yet its applications cover a broad area relating to the mechanical behavior of materi­ als: plasticity, fracture and fatigue, constitutive equations, composite materi­ als, polycrystals, etc. These subjects are treated in this book by means of a powerful and unified method which is called the 'eigenstrain method. ' In particular, problems relating to inclusions and dislocations are most effectively analyzed by this method, and therefore, special emphasis is placed on these topics.