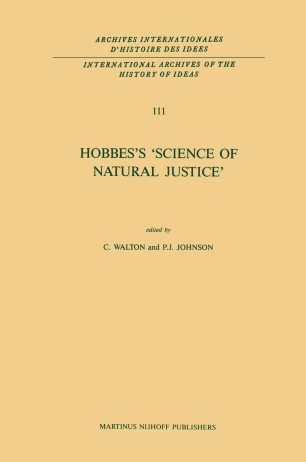 Unlike many major figures in Western intellectual history, Hobbes has refused to become dated and quietly take his appointed place in the museum of historical scholarship. Whether by way of adoption or reaction, his ideas have remained vibrant forces in mankind's attempts to understand the problems and dilemmas of living peaceably with one another. As Richard Ashcraft said a few years ago: One of the standards by which the greatness of political theorists is measured, is their ability to evoke in us new insights into 'the human condition'. Only a few political writers have risen Dionysus-like from the titanic assaults of their critics to become even more formidable forces in the shaping of our destiny. One of these giants is surely the irascible l and irrepressible Thomas Hobbes . Given the power of Hobbes's thought, it is not then perhaps surprising to find that his writings have generated seemingly endless scholarly controversy and an astonishing range of imcompatible interpretations. Among other things, he has been interpreted as a theist and an atheist, as a utilitarian and a deontologist, a humanist and a scientist, as a traditional natural law theorist and a legal positivist, a contractualist and an absolutist - indeed, as Professor Morris notes in his contribution to the present volume, 'as almost any kind of philosophical 'ist except Platonist or Aristotelist'.