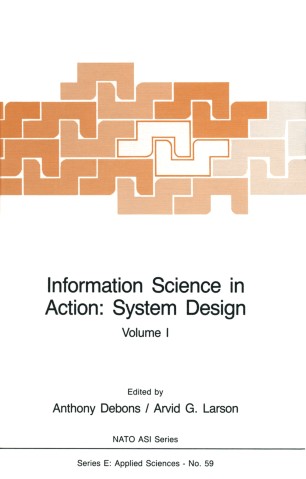 In August 1978, one hundred or so scholars from several countries around the world met in Crete, Greece to discuss the progress made in designing information systems and the relation of information science to this activity. This was the Third Advanced Study Institute supported by the North Atlantic Treaty Organization, Brussels, Belgium. The first Institute was conducted in 1972 and held in Seven Springs, Pennsylvania. The results of this Institute were published by Marcel Dekker and titled Information Sc. ience: Search for Identity. The'second Institute was held at the College of Librarianship, Aberystwyth, Wales in the summer of 1974. The proceedings were published by Noordhoff International Publishing, Leyden, The Netherlands, entitled Perspectives of Information Science edited by A. Debons and Hilliam Cameron. The three institutes that were conducted shared a common purpose, namely, to assess the state of affairs of information science and to share this assessment with inter­ national community. Information science can be said to have emerged during the past two, three decades in response to the significant increase in data-knowledge processing technology, the growth of knowledge as the result of these trends and the increase in problem solving, decision making complexity that faced all institutions at all levels throughout the world. Information systems, for many reasons, remain as an abstraction. Nevertheless, considerable funds and human efforts are being expended on them. Thus, such systems are of vital concerns to both scientists and technologists who are involved in them.