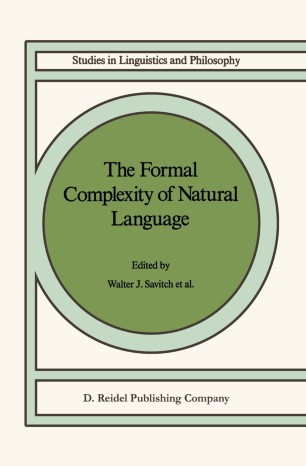 The Formal Complexity of Natural Language

Part of the Studies in Linguistics and Philosophy book series (SLAP, volume 33)

Ever since Chomsky laid the framework for a mathematically formal theory of syntax, two classes of formal models have held wide appeal. The finite state model offered simplicity. At the opposite extreme numerous very powerful models, most notable transformational grammar, offered generality. As soon as this mathematical framework was laid, devastating arguments were given by Chomsky and others indicating that the finite state model was woefully inadequate for the syntax of natural language. In response, the completely general transformational grammar model was advanced as a suitable vehicle for capturing the description of natural language syntax. While transformational grammar seems likely to be adequate to the task, many researchers have advanced the argument that it is "too adequate. " A now classic result of Peters and Ritchie shows that the model of transformational grammar given in Chomsky's Aspects [IJ is powerful indeed. So powerful as to allow it to describe any recursively enumerable set. In other words it can describe the syntax of any language that is describable by any algorithmic process whatsoever. This situation led many researchers to reasses the claim that natural languages are included in the class of transformational grammar languages. The conclu­ sion that many reached is that the claim is void of content, since, in their view, it says little more than that natural language syntax is doable algo­ rithmically and, in the framework of modern linguistics, psychology or neuroscience, that is axiomatic.