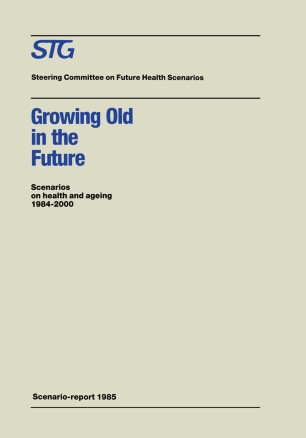 Growing Old in the Future

Part of the Scenario-report, commissioned by the Steering Committee on Future Health Scenarios book series (FUHS)

This publication represents the report of the Scenario Committee on Ageing. The draft report was discussed with a wide range of experts, inter alia during the symposium 'Growing Old in the Future' held on October 27th, 1984. In addition to the scenario report, a background report containing the basic analysis employed in the scenarios on ageing has been prepared. The scenario report has been written in such a way that it can be read independently of the background study. Scenarios are a relatively new phenomenon in health care and related policy. For this reason it might be useful to furnish the reader with a few suggestions. As a first step, perusing the summary will provide the reader with an ~verall picture of this application of the scenario method in policy preparation and policy implementation in the sector health of the elderly. As a second step, we would recommend that the scenario report be read in its totality. It might be useful to note down points on which the reader would like to make additions or variations.