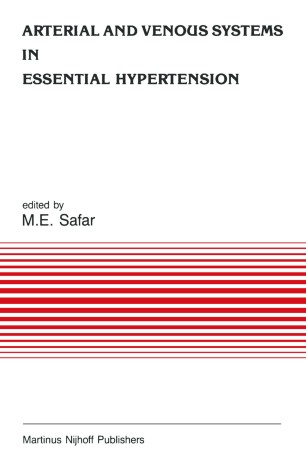 The hemodynamic mechanisms of hypertension are often limited to the study of three dominant parameters: blood pressure, cardiac output and vascular resis­ tance. Accordingly, the development of hypertension is usually analyzed in terms of a 'struggle' between cardiac output and vascular resistance, resulting in the classical pattern of normal cardiac output and increased vascular resistance, thus indicating a reduction in the caliber of small arteries. However, during the past years, the clinical management of hypertension has largely modified these simple views. While an adequate control of blood pressure may be obtained with antihypertensive drugs, arterial complications may occur, involving mainly the coronary circulation and suggesting that several parts of the cardiovascular system are altered in hypertension. Indeed, disturbances in the arterial and the venous system had already been noticed in animal hypertension. The basic assumption in this book is that the overall cardiovascular system is involved in the mechanisms of the elevated blood pressure in patients with hypertension: not only the heart and small arteries, but also the large arteries and the venous system. For that reason, the following points are emphasized. First, the cardiovascular system in hypertension must be studied not only in terms of steady flow but also by taking into account the pulsatile components of the heart and the arterial systems. Second, arterial and venous compliances are altered in hypertension and probably reflect intrinsic alterations of the vascular wall.