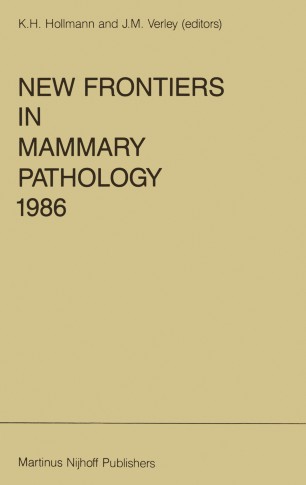 Part of the Developments in Oncology book series (DION, volume 49)

Society The Third Symposium of the International held in against Breast Cancer CONTRA CANCRUM MAMMARIUM was Paris, at UNESCO, on December 9-12, 1985. Scientists and physicians came from allover the world to attend this meeting. They came from Japan, Brazil, the United States and the Middle East, from Belgium, Finland, Germany, Greece, Italy, the Netherlands, Norway, Portugal, Spain, Sweden, Switzerland, Yugoslavia, and from allover France. They all contributed to the success of the Symposium and my cordial thanks go to all of them and particularly to the invited speakers and chairmen of the sessions, to the free-paper contributors, and to the contributors to the Slide Seminar. Warm personal thanks go to two friends: to Professor Dan H. Moore from Hahnemann University, Philadelphia, who was always there to help in many ways, and to Professor Pietro Gullino from the National Cancer Institute, Bethesda, and now Torino, Italy, who consistently gave invaluable advice. Special thanks are also due to those who assisted in the preparation and organization of the Symposium: the UNESCO officers, the interpreters, the secretaries and hostesses, the BEBA Company with the help of Dr.Bernard Martin and Mrs.Jacqueline Bouchy, the WILD­ LEITZ-France S.A. for projection facilities and microscope arrangements for the workshop on mammary cytology which was successfully conducted by Dr.Colette Marsan. During the four days,three main topics were discussed: ~ E~idemiology, genetiCS and oncogenes, related subjects of great actuality.