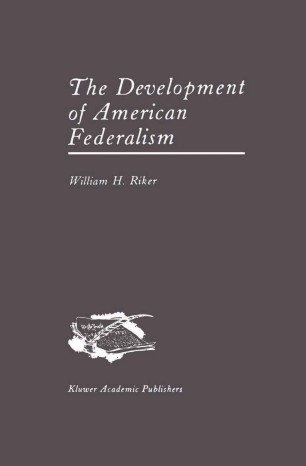 The Development of American Federalism

The chapters of this book have diverse origins. They were written over the period 1954-1984. Several (i.e., three, four, seven, and ten) were originally published in scholarly journals. Several (i.e., one, eight, nine, and eleven) are excerpts from my previous books: Soldiers of the States and Federalism: Origin, Operation and Significance. And several (i.e., two, five, and six) were written for conferences and are now published here for the first time. Despite the fact that this history suggests they are quite unrelated, these chapters do indeed center on one theme: the continuity of American federalism. In order to emphasize that theme, I have written an introduction and an initial commentary for each chapter. These commen­ taries, taken together, with the introduction, constitute the exposition of the theme. Some of these chapters (four, six, and ten) were written with my students, Ronald Schaps, John Lemco, and William Bast. They did much of the research and analysis so the credit for these chapters belongs to them as much as to me. Chapter five is based quite closely on William Paul Alexander's dissertation for the Ph. D. degree at the University of Rochester, 1973.