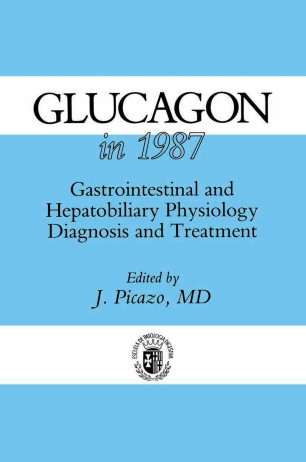 I am very pleased to say once again that I was delighted at being invited to chair this Third International Workshop on Glucagon (Glucagon in 1987). The two previous ones were held in Madrid under the auspices of the Medical School of the Universidad Complutense of that city, the first in May 1978 and the second in October 1981, which resulted in two books (Glucagon in 1979, and Glucagon in Gastroenterology and Hepatology, 1982, Gastroenterology, both published by MTP Press), where the mounting interest in and develop­ ments concerning the therapeutic applications of glucagon were reflected. This time the meeting was held in Barcelona under the auspices of the Escuela de Patologia Digestiva of the Universidad Aut6noma of Barcelona, a change that we especially welcomed because it is not very often that we are able to assemble in our city such a distinguished group of scientists from all over the world. As can be seen from the title of the present book, this workshop focussed once again on the current status of glucagon in gastroenterology and hepatology, because although much has been said and discussed about the subject already, it still raises exciting and intriguing issues for debate. There were two parts to this meeting. The gastroenterology session was concerned with the physiology and pathophysiology of glucagon in the gastrointestinal tract and its applications in diagnosis, endoscopy and radiology.