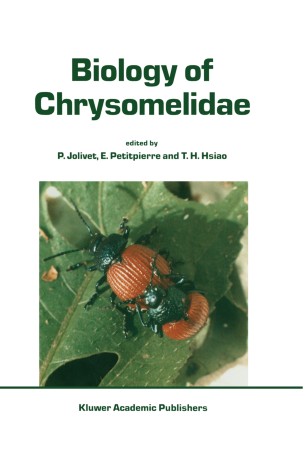 As in most groups of insects, scientific research on the Chrysomelidae began in Europe in 1758, with the description of a few genera and species by the Scandinavian entomologists C. von Linne, I.C. Fabricius, and others. As the 19th century dawned, many systematic entomologists took up the study of chrysomelid beetles, together with other groups of beetles, and many new species and genera were described from all parts of the world. This trend has, of course, continued down to the present time. However, researches on the Chrysomelidae did not remain restricted to systematics, and many new lines of study have been followed, especially in the present century, by workers who have benefitted from the advances made in related fields of pure and applied entomology. Much has been achieved in the study of the Chrysomelidae, as elsewhere, and it is the aim of the present book to provide a summary and guide to these achievements. It is also to be expected that this book will provide a stimulus for further studies on the Chrysomelidae, so that we can anticipate continuing progress in our knowledge and understanding of this group through the endeavours of an ever-increasing number of scientists. I offer my congratulations to all concerned in the preparation of this book and my best wishes for its success.