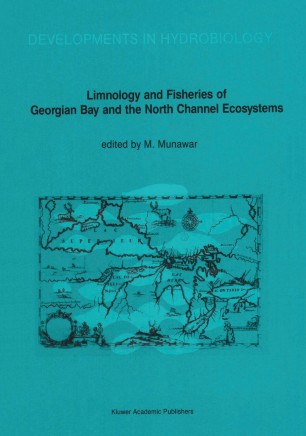 Limnology and Fisheries of Georgian Bay and the North Channel Ecosystems

Part of the Developments in Hydrobiology book series (DIHY, volume 46)

'The criterion of true beauty' , wrote Fulke Greville, 1st Baron of Burke, 'is that it increases on examination; if false, that it lessens. There is therefore something in true beauty that corresponds with right reason, and it is not the mere creation of fantasy.' The authors of this compact volume have increased the beauty of an area that is commonly and rightly ac­ knowledged to be one of the loveliest parts of the Great Lakes. They have done this by integrating the historical, industrial, and cultural influences on 'Lake Manitoulin' in sixteen manuscripts. It is enigmatic that Lake Huron, the second of the Great Lakes to be discovered by European explorers, has been the last to be adequately described Iimnologicaliy. As recently as 1966, for example, Alfred M. Beeton wrote in Limnology in North America: ' ... even a list of the more common species comprising the plankton of Lake Huron could be an original contribution to scientific literature.' Comparable statements could have been made for sediments, benthos, and water chemistry. This volume reflects a change of course and Georgian Bay and the North Channel of Lake Huron are now on the scientific map. Science is 'right reason'. Its application to Georgian Bay and the North Channel is a welcome and timely addition for the renewal of public, political, and scientific interest in the conservation of the Great Lakes.

`The book can be recommended not only to all readers interested in the Great Lakes region but also to all limnologists, especially to those studying aquatic ecosystems on a broad scale.'
Internationale Revue der gesamten Hydrobiologie, 75:1, 1990