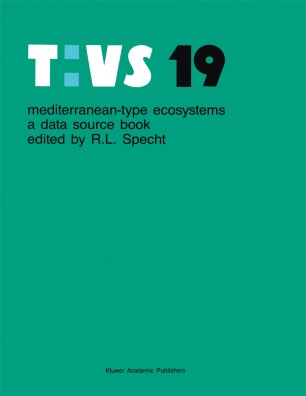 The regions of the world which experience a mediterranean type climate, with a cool wet season alternating with a hot dry summer, contain some of the world's most attractive landscapes. In the Old World, the mediterranean landscapes became the cradle of civilization; other mediterranean areas of the world have attracted considerable populations for many centuries. These large human populations have exerted consid­ erable stress on the fragile ecosystems which developed in these sunny, but droughted, fire-prone land­ scapes. The mediterranean landscape has thus become one of the most threatened in the world. In recent years much has been learned about the structure and function of mediterranean-type ecosystems (Di Castri and Mooney 1973, Mooney 1977, Thrower and Bradbury 1977, Mooney and Conrad 1977, Specht 1979, 1981, Miller 1981, Di Castri et at. 1981, Conrad and Oeche11982, Queze11982, Margaris and Mooney 1981, Kruger et ai. 1983, Long and Pons 1984, Dell et ai. 1986, Tenhunen et ai. 1987). Much of this research has been fostered under the International Biological Program (IBP), UNESCO Man and the Biosphere Program (MAB) and, recently, the International Society of Mediterranean Ecologists (ISOMED). To facilitate intercontinental comparisons, many of these studies have concentrated on a limited number of intensive sites thought to be representative of a general region.