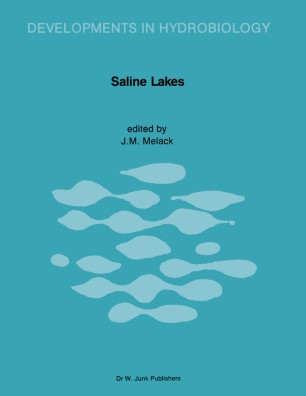 Part of the Developments in Hydrobiology book series (DIHY, volume 44)

Limnological research on saline lakes is practiced by a growing cadre of scientists active worldwide in a diversity of disciplines. Every three years since 1979, an international symposium on inland saline waters has served to strengthen and expand the scope of the studies. Promising areas for further research especially well suited to saline lakes include the comparative physiology of adaptation to osmotic stresses, the role of microbial and protozoan communities in nutrient dynamics and biotic interactions in ecosystems with few species. The Third International Symposium on Inland Saline Lakes was held at the University of Nairobi, Nairobi, Kenya, under the auspices of the Societas Internationalis Limnologiae (SIL). The symposium was sponsored by and received financial or other support from the U.S. National Science Foundation (International Program), United Nations Environment Program, University of California, Santa Barbara, and University of Nairobi. The proceedings occurred for three days (28-31 August, 1985) and were attended by 33 scientists from 14 countries (see list of Participants). On the day prior to the first formal session an afternoon trip to Lake Magadi and salt works was held. The tribulations of this excursion served to acquaint the participants with each other and with the realities of exploring the African bush. A three day post-congress expedition to the rift valley included visits to spectacular saline lakes such as Nakuru and Bogoria. Much of the meeting's and excursion's success is owed to the efforts of the local organizer, Dr. Stephen G.