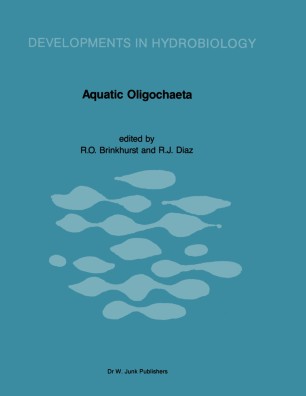 Part of the Developments in Hydrobiology book series (DIHY, volume 40)

The Third International Symposiumn on Aquatic Oligochaeta was organized by Drs. 0. Giere, M. Dzwillo, R. Grimm and colleagues. Over 50 scientists attended, and while the number of nationalities dropped from 17 to 12, we were pleased to welcome our first Chinese delegation. At a brief business meeting, the invitation to attend the Fourth Symposium at Baton Rouge, Louisiana, US.A., hosted by Walter Harman in 1988 was approved. The meeting is scheduled to begin on March 15. An invitation to hold the meeting in the Soviet Union was presented for Thrmo Timm in his absence, and it was agreed unanimously that the 1991 meetings be held there, perhaps at Thllin on the Gulf of Finland. Christer Erseus has agreed to consider G6teborg, Sweden as an alternate for 1991 and as a positive invitation for 1994, so we are well prepared for the future. Olav Giere has recently expressed opinions about publishing the proceedings of conferences that make it clear why he is not the editor of this volume. Michael Dzwillo was prevented from completing the task by pres­ sure of other business, and so we undertook the task somewhat late. While we share much of Olav Giere's concern about such volumes, an honest attempt to review the papers does help to maintain quality, and both of us wish to thank contributors for their positive response to our often quite drastic re-writing of manuscripts.