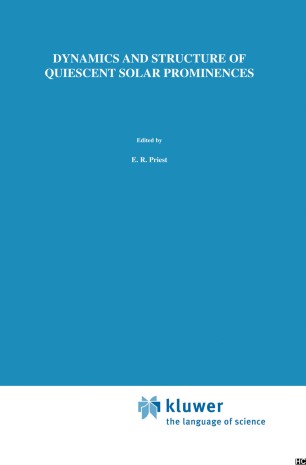 Prominences are amazing objects of great beauty whose formation, basic structure and eruption represent one of the basic unsolved problems in Solar Physics. It is now 14 years since the last book on prominences appeared (Tandberg-Hanssen, 1974), during which time much progress in our knowledge of the physics of prominences has been made, and so the time is ripe for a new text book which it is hoped will be a helpful summary of the subject for students, postdocs and solar researchers. Indeed, the last few years has seen an upsurge in interest in prominences due to high­ resolution ground-and space-based observations and advances in theory. For example, an IAU colloquium was held in Oslo (Jensen et al, 1978), a Solar Maximum Mission Workshop took place at Goddard Space Right Center (poland, 1986), an IAU Colloquium is planned in Yugoslavia in September 1989 in prominences and it is expected that the SOHO satellite will be a further stimulus to prominence research. In November 1987 a Workshop on the Dynamics and Structure of Solar Prominences was held in Palma Mallorca at the invitation of Jose Luis Ballester with the aim of bringing observers and theorists together and having plenty of time for in-depth discussions of the basic physics of promi­ nences.