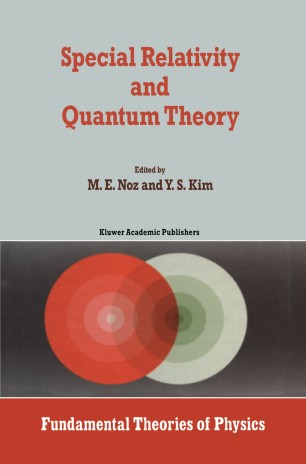 A Collection of Papers on the Poincaré Group

Special relativity and quantum mechanics are likely to remain the two most important languages in physics for many years to come. The underlying language for both disciplines is group theory. Eugene P. Wigner's 1939 paper on the Unitary Representations of the Inhomogeneous Lorentz Group laid the foundation for unifying the concepts and algorithms of quantum mechanics and special relativity. In view of the strong current interest in the space-time symmetries of elementary particles, it is safe to say that Wigner's 1939 paper was fifty years ahead of its time. This edited volume consists of Wigner's 1939 paper and the major papers on the Lorentz group published since 1939. . This volume is intended for graduate and advanced undergraduate students in physics and mathematics, as well as mature physicists wishing to understand the more fundamental aspects of physics than are available from the fashion-oriented theoretical models which come and go. The original papers contained in this volume are useful as supplementary reading material for students in courses on group theory, relativistic quantum mechanics and quantum field theory, relativistic electrodynamics, general relativity, and elementary particle physics. This reprint collection is an extension of the textbook by the present editors entitled "Theory and Applications of the Poincare Group." Since this book is largely based on the articles contained herein, the present volume should be viewed as a reading for the previous work. continuation of and supplementary We would like to thank Professors J. Bjorken, R. Feynman, R. Hofstadter, J.