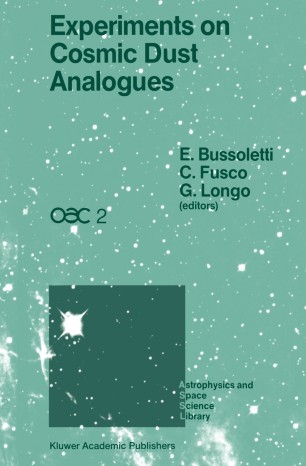 Proceedings of the Second International Workshop of the Astronomical Observatory of Capodimonte (OAC 2), held at Capri, Italy, September 8–12, 1987

Astrophysical analysis relating to solid matter requires data on properties and processes. Such data, however, expecially appropriate to space conditions are mostly lacking. It appeared then very tempting to gather together experimentalists, ob­ servers and theoreticians working in the field of cosmic dust and in related areas. The Workshop held in Capri (Italy) from September 8th till 12th 1987 gave the participants a unique opportunity for exchange of ideas and discussions of problems and experimental procedures. Introductory reports were prepared with the aim of giving the state of the art about single subjects; contributed poster papers presented, on the contrary, very recent results in the various fields. According to his specific interest each attendant has also contributed to three Working Groups respectively on a) carbon, b) silicates, c) ice and related topics. Scientifical and technical problems about these items were discussed in great detail. Though no definite answers were given, useful indications come out which will be of some help for future works. In addition to the scientific efforts, the Capodimonte Observatory and the Istituto Universitario Navale sought to give a warm welcome to the participants. Thanks to several sponsors, the LOC could organize some excursions and shows to entertain people during their spare time.