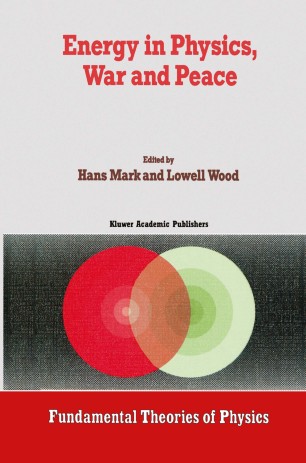 Energy in Physics, War and Peace

Writing even in overview of more than a half-century of professional life of a giant of twentieth century science and technology such as Edward Teller is a daunting task. We ask in advance the reader's pardon for passing over quickly or omitting entirely aspects of Teller's life and work which may seem of major significance but which we, due to differences of perspective or knowledge, speak too little or not at all. We refer those interested in greater depth to the excellent biography by Stanley Blumberg and Gwen Owens, The Life and Times of Edward Teller, and we have (with his permission) printed Professor Eugene Wigner's An Appreciation On the 60th Birthday of Edward Teller immediately after this foreword, so that the reader may consider the perspective of one of Teller's most illustrious contemporaries more than two decades ago. Edward Teller was born in Budapest, Hungary on January 15,1908. While his childhood was spent in the twilight of the Victorian age and its abrupt conclusion in the Great War and his youth in its especially turbulent after­ math in central Europe, he doesn't bear visible scars from it.