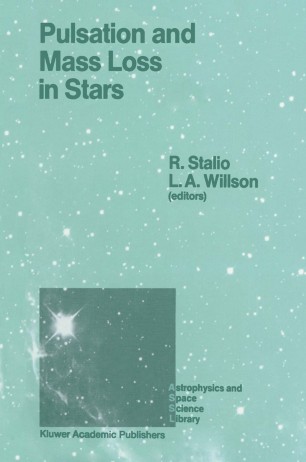 Pulsation and Mass Loss in Stars

Stellar mass loss is an essential part of the cycling of material from the interstellar medium into stars and back, and must be understood if we are to model processes on galactic to cosmological scales. The study of stellar winds and the effects of stellar mass loss has reached a particularly exciting stage where observational capabilities are increasingly able to provide interesting constraints on models and theories. Recent resu1ts from theoretical and observational work for both hot and cool stars with substantial winds have led to the suggestion that a combination of pulsation with other mechanisms makes for particularly efficient mass loss from stars. This provided the original motivation for the organization of this workshop. The conference was organized along relatively conventional lines according to the types of objects being scrutinized. However the true unity of the proceedings comes from the interplay of the mechanisms involved. For example, for the cool, luminous Mira variables, pulsation leads to shock waves that extend the atmosphere, enhancing dust formation; radiation pressure on dust drives the wind, cooling the atmosphere and in some cases suppressing the shocks. Similarly for the Be stars, both pulsation (in this case, non-radial) and radiation pressure (due to UV resonance lines) are expected to be important, and this expectation is at least qualitatively borne out by the observations.