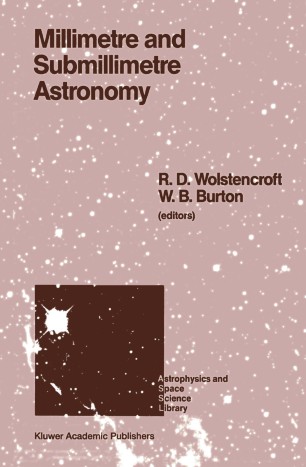 The millimetre and submillimetre spectral region (300 to 3000 Ilm or 1000 to 100 GHz) was until recently one of the few spectral regimes not fully opened up for astronomical studies. Thanks both to improvements in detectors and receivers and to the construction of large telescopes at high altitude sites this situation is improving very rapidly. Three major telescopes have been built recently and are coming into operation during 1987 and 1988, namely the 15m James Clerk Maxwell Telescope (JCMT) and the lOAm Caltech Submillimetre Observatory (CSO) telescope, both located on Mauna Kea, Hawaii, and the 15 m Swedish -ESO telescope (SEST) in Chile. Because a very wide range of astronomical problems can be tackled with these major new facilities there is a great deal of interest from the many potential new users anxious to become familiar with this rapidly developing field. During 1986 it became clear to British and Dutch astronomers involved in planning the commissioning and operation of the JCMT, that a summer school in this field would greatly benefit the potential and actual JCMT user community. With financial support from the SERC and supplemented by a grant from the ZWO, the Summer School on 'Millimetre and Submillimetre Astronomy' was held at Stirling University from June 21 to 27, 1987.