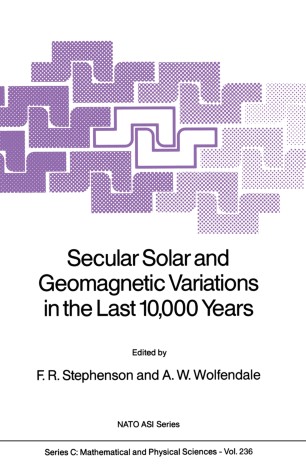 Secular Solar and Geomagnetic Variations in the Last 10,000 Years

Solar and geomagnetic variability are of considerable interest for scientists of many different persuasions and indeed one has the distinct impression that for the sun at least, there is direct relevance for mankind in general as the interrelation between solar and terrestrial phenomena is starting to be appreciated. From the vast time scale of interest in the variability field, attention was confined to the last 10,000 years in a NATO Advanced Research Workshop held from April 6 - 10, 1987 in Durham, England, and the present publication comprises the lectures given there. Such a Workshop was very timely in view of the impressive new data available from 14C analysis in dated tree rings and lOBe in polar ice cores, from natural palaeomagnetic records in lacustrine sediments and from archaeomagnetic material. Also to be mentioned are new studies of historical accounts of naked-eye sunspots and aurorae. All the data have contributed to improvements in under­ standing the relative variations of solar properties, the geomagnetic field and climate and it is hoped that this volume will convey the flavour of these advances in knowledge. A feature of the Workshop was the lively discussions which followed so many of the papers. There were several instances of healthy disagreement and this is reflected in the opposing views presented inanumber of the papers published here.