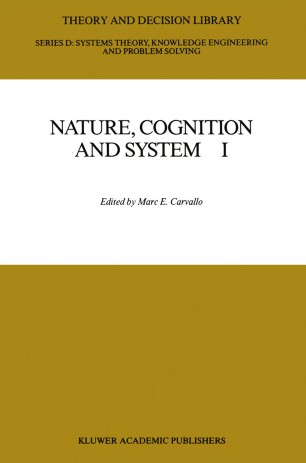 Nature, Cognition and System I

usually called the classical (scientific) attitude (according to which there is a dichotomy between nature and cognition) and suggestions for better understanding of their mutual encroach­ ment. The authors belong more or less to the non-standard systems­ science, the third order cybernetics, or find themselves already beyond the third stage in the history of artificial intelli­ 1 gence ). They take the inescapability of the mutual implication of the description of nature and that of cognition seriously. Fourth­ ly, closely linking up with the previous, it emphatically calls attention to the forgotten microscopic dimension of science. If I am not mistaken we have at this moment reached the historic stage where the tremendous renascence of the mechanistic-structural paradigm, remarkably enough, calls for its functional-dynamic counterparts. The volume strives to respond to this secret trend in various disciplines and to put into words that which is tacitly alive in the minds of the ever increasing number of people in this systemsage. The investigation on the intertwinement of nature and cognition finds itself in this very paradoxical niche structured by those two opposite developments.