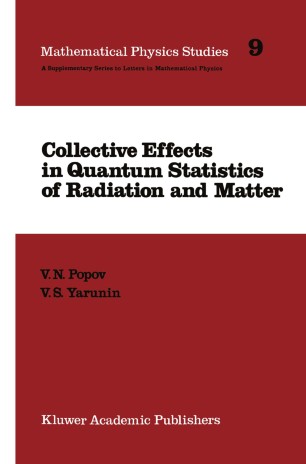 Collective Effects in Quantum Statistics of Radiation and Matter

Material particles, electrons, atoms, molecules, interact with one another by means of electromagnetic forces. That is, these forces are the cause of their being combined into condensed (liquid or solid) states. In these condensed states, the motion of the particles relative to one another proceeds in orderly fashion; their individual properties as well as the electric and magnetic dipole moments and the radiation and absorption spectra, ordinarily vary little by comparison with their properties in the free state. Exceptiotls are the special so-called collective states of condensed media that are formed under phase transitions of the second kind. The collective states of matter are characterized to a high degree by the micro-ordering that arises as a result of the interaction between the particles and which is broken down by chaotic thermal motion under heating. Examples of such pheonomena are the superfluidity of liquid helium, and the superconductivity and ferromagnetism of metals, which exist only at temperatures below the critical temperature. At low temperature states the particles do not exhibit their individual characteristics and conduct themselves as a single whole in many respects. They flow along capillaries in ordered fashion and create an undamped current in a conductor or a macroscopic magnetic moment. In this regard the material acquires special properties that are not usually inherent to it.