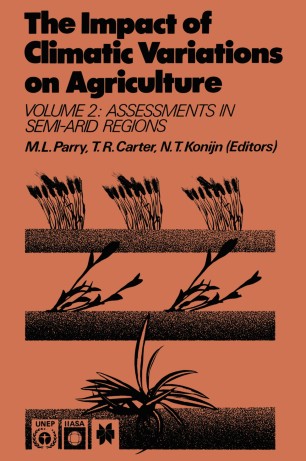 The Impact of Climatic Variations on Agriculture

Three important studies were initiated in the 19708 to investigate the relation­ ship between climatic variations and agriculture: by the National Defense University (1980) on Crop Yields and Climate Change to the Year eooo, by the U.s. Department of Transportation (1975) on Impacts 0/ Climatic Change on the Biosphere and by the U.s. Department of Energy (1980) on Environmental and Societal Consequences 0/ a Possible CO -Induced Climatic Change (the ClAP 2 study). These were pioneering projects in a young field. Their emphasis was on measuring likely impacts of climatic variations rather than on evaluating possible responses, and they focused on first-order impacts (e.g., on crop yields) rather than on higher-order effects on society. A logical next step was to look at higher-order effects and potential responses, as part of a more integrated approach to impact assessment. This was undertaken by the World Climate Impact Program (WCIF), which is directed by the United Nations Environment Program (UNEP). The WCIF is one of four aspects of the World Ciimate Program, which was initiated in 1979.