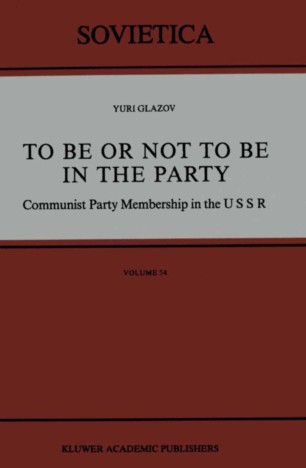 To Be or Not to Be in the Party

Communist Party Membership in the USSR

In March of 1985 Mikhail Gorbachev came to power in the Seviet Union. Initially, one could discern serious changes in the policy and statements of this new, young, and obviously efficient leader only with great difficulty. While abroad, Gorbachev had said that anti-Stalinism was a form of anti-Communism. The newspapers were filled with words lauding "the sacred traditions of the 1930's". At the same time, the campaign against drunkenness, corruption, and sloppiness launched by Yuri Andropov was given a new impetus and the highest Party support. In April, 1986, the Chernobyl tragedy took place. The first reaction of the Soviet authorities was the usual one. The Soviet public was not properly informed about the disaster and its unprecedented peril. Millions of jubilant Soviet citizens crowded the squares and streets of Kiev and Minsk during the May Day festivities. We can only guess what the reaction of the Kremlin authorities would have been had not Swedish scientists traced and announced to the world the threatening level of radioactivity. Would the terms "glasnost'" and "perestrojka" have spread through the world press with such intensity and alacrity? A popular Soviet author wrote a year later in the Soviet media: "Chernobyl appeared to be not only a national event, a disaster shared by each of us, but also a dividing line between two eras of time.