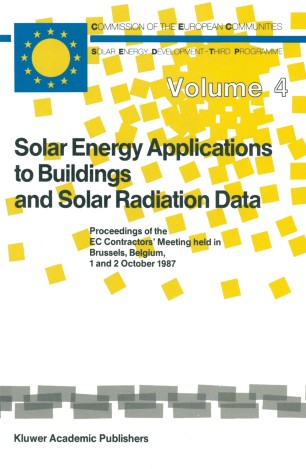 Proceedings of the EC Contractors’ Meeting held in Brussels, Belgium, 1 and 2 October 1987

This volume provides a valuable overview of the Commission's current activities in research on solar radiation data and in the development of solar energy applications in buildings. It contains the proceedings of the second contractors' co ordination meeting in the third four­ year R+D programme (1985-88) in these two fields, which was held in Brussels on 1 and 2 OCtober 1987. The first meeting was held on 13 and 14 November 1986. (') The research contractors' reports presented in this book give a full account of activities at an important stage in the programme where most projects have completed their preparatory stages and productive research is now fully underway. A feature of the reports is the pattern they illustrate of working groups in which practically all of the Member states are represented, co operating in the attainment of common goals within a co ordinated European programme. The meeting was attended by 60 participants and extended over two days. Presentations were made by the contractors on the objectives of their projects, progress made in the research, and future work plans and priorities. Each presentation was followed by a short d- cussion. The meeting was also important in improving communications between the research groups, exposing opportunities for co operation and collaboration, and monitoring progress. Among key achievements reported in the area 'Solar Radiation Data' is the implementation of a network of measuring stations at eight proto­ typical sites throughout Europe.