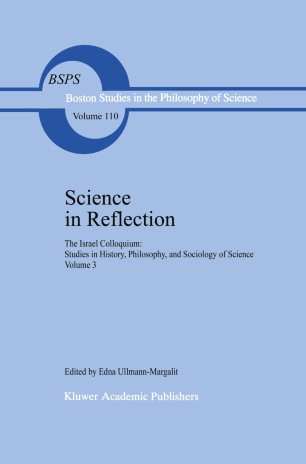 The Israel Colloquium: Studies in History, Philosophy, and Sociology of Science Volume 3

Part of the Boston Studies in the Philosophy of Science book series (BSPS, volume 110)

The Israel Colloquium for the History, Philosophy and Sociology of Science presents before you its third volume of proceedings. The philosophy section of the volume has three main foci: the scientific explanation (Hempel and Ben-Menachem, Elster and Dascal); realism in science (Cohen and Zemach) and its implications for the problem of universals (Armstrong and Bar-Elli); and the question of demarcation: the dividing line between science and philosophy (KrUger), as well as the cognitive limits of science (Stent). There is no neat separation in this volume between essays on the history of science and those on the sociology of science, and perhaps properly so. Thus, Lenoir's contribution is a clear example of the way the two disciplines combine and interrelate. Joseph Ben-David's comment on this lecture was among the last things he wrote, knowing full well that his days were numbered. Reading his contribution imparts a strong sense of loss, the loss of a great sociologist and a wise man. Not only history, however, but also historiography is a subject for reflection in this volume (Freudenthal and Kerszberg). And, finally, a couple of articles convey the sense of fascination with science as a story (Heilbron, Hughes). We have by now come to expect from the investigations reported in the Israel Colloquium series not surface unity of theme and method, but rather an underlying common commitment and zest for the scientific enterprise at its best. The third volume hopes to join the first two in footing this bill.