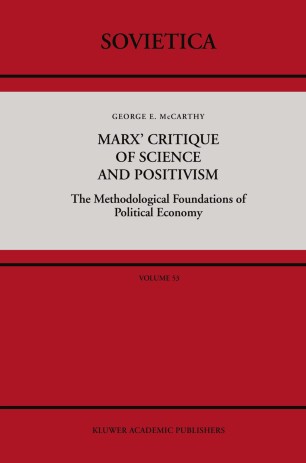 Marx’ Critique of Science and Positivism

The Methodological Foundations of Political Economy

political economy. With this in mind the reader will be taken through three meta-theoretical levels of Marx' method of analysis of the struc­ tures of capitalism: (1) the clarification of 'critique' and method from Kant's epistemology, Hegel's phenomenology, to Marx' political economy (Chapter One); (2) the analysis of 'critique' and time, that is, the temporal dimensions of the critical method as they evolve from Hegel's Logic to Marx' Capital and the difference between the use of the future in explanatory, positivist science and 'critique' (Chapter Two); (3) and finally, 'critique' and materialism, a study of the complexity of the category of materialism, the ambivalence and ambiguity of its use in Marx' critical method, and the ontological and logical dilemmas created by the Schelling-Feuerbach turn toward materialism in their critique of Hegel (Chapter Three). The critique of political economy is, therefore, examined at the levels of methodology, temporality, and ontology. To what do the categories of political economy really refer when the positivist interpretations of Marx have been shattered and 'critique' be­ comes the method of choice? What kind of knowledge do we have if it is no longer "scientific" in the traditional sense of both epistemology and methodology? And what kind of applicability will it have when its format is such as not to produce predictive, technical knowledge, but practical knowledge in the Greek sense of the word (Praxis)? What be­ comes of the criterion of truth when epistemology itself, like science, is