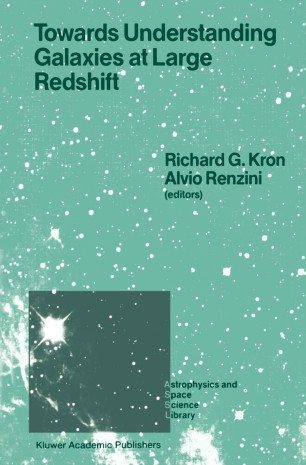 Towards Understanding Galaxies at Large Redshift

Proceedings of the Fifth Workshop of the Advanced School of Astronomy of the Ettore Majorana Centre for Scientific Culture, Erice, Italy, Juni 1–10, 1987

This workshop was intended as an update and an extension of the workshop 011 the "Spectral Evolution of Galaxies" that was held in Erice two years ago. It concentrates 011 Ilew developments concerning galaxies seen at large look back times. This seemed also a good opportunity to look ahead to the next generation of ground- and space­ based instrumentation, and to consider various future strategies for collecting information concerning the edge of the observable universe. The main idea was to bring together people with specialities in modelling galaxy components (such as stars, clusters, gas, and dust) as well as whole stellar systems (stellar populations, star formation rates, chemical enrichment), and people specialized in making direct measurements of galaxies and clusters at large look back times. The confrontation of expectations and observations was planned to be the central theme of the conference, which explains the title "Towards Understanding Galaxies at Large Redshift". The first part of the workshop focussed on the physical processes that operate in galaxies, and that would likely have some observable manifestation at large redshifts. In the second part the most recent observational work was reported, and we were pleased to have the participation of most of the groups active in this field. The last part was directed towards new approaches to be made possible by the next generation of instrumentation, although in general all the contributions were indeed in this spirit of setting more ambitious goals.