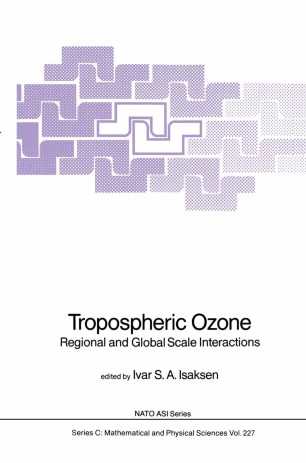 The main objective of the workshop was to increase our knowledge of ozone formation and distribution in the troposphere, its relation to precursor (NO~ and HC species) distribution, how it is affected by transport processes in the troposphere, and to show how the increasing levels of ozone can cause environmental problem. The focus was on the interaction of ozone on regional and global scales. There is mounting evidence that such interactions occur and that the ozone levels are increasing in most of the Northern Hemisphere tropo­ sphere. A likely source of ozone increase is human activity. As result of this, tropospheric climate may change significantly within a few decades, either through direct effects by ozone itself or indirectly through its effect on other radiatively active trace species. Further­ more, ozone may have adverse effects on vegetation over large continental areas due to enhanced levels which have been measured to take place. As it is well known that ozone plays a key role in the oxidation of a large number of chemical species in the troposphere, natural as well as man-made, the atmospheric distribution of important trace species like sulfur dioxide, nitrogen oxides and hydrocarbons could be markedly changed as a result of ozone changes. The rapidly increasing interest in tropospheric ozone, and the key role ozone plays in several atmospheric areas as well the obvious increase in the tropospheric concentration of ozone made ozone a natural choice as a topic for the workshop.