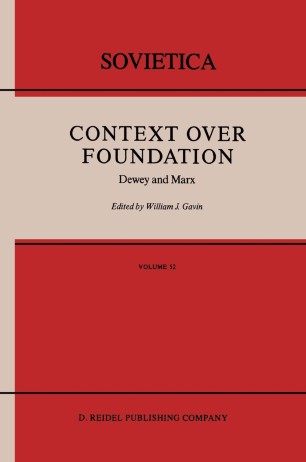 "I should venture to assert that the most pervasive fallacy of philosophic thinking goes back to neglect of context. III John Dewey " . . . philosophers do not grow like mushrooms, out of the earth; they are the outgrowth of their period, their nation, whose most subtle, delicate and invisible juices abound in the philosophical ideas. ,,2 Karl Marx Few issues are more heatedly debated in contemporary philosophy circles than that of con textual ism vs. foundationalism. The genesis for the debate was the publication in 1979 of Richard Rorty's Philosophy and the Mirror of Nature, which announ~ed the death of traditional philosophy. By "traditional" here is meant the quest for a certain or apodictic bedrock upon which an overall general theory or schema might be erected. This approach, for Rorty, characterized most previous philosophy, but especially the era from Descartes to Kant. Further, the three major philosophic thinkers of the 20th century, Dewey, Heidegger, and Wittgenstein, each initially tried to construct a foundational philosophy but each of the three, in his later work, broke free of the Kantian conception of philosophy as foundational, and spent his time warning us against those very temptations to which he himself had once succumbed. Thus their later work is therapeutic rather than constructive, edifying rather than systematic, designed to make the reader question his own motives for philosophizing rather than to 3 supply him with a new philosophical program.