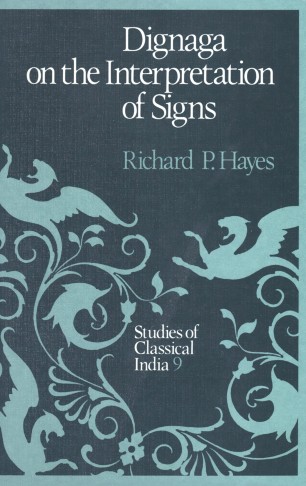 Dignaga on the Interpretation of Signs

Buddhist philosophy in India in the early sixth century C. E. took an important tum away from the traditional methods of explaining and systematizing the teachings in Siitra literature that were attributed to the Buddha. The new direction in which several Indian Buddhist philosophers began to move was that of following reasoning to its natural conclusions, regardless whether the conclusions conflicted with traditional teachings. The central figure in this new movement was DiIinaga, a native of South India who found his way to the centre of Buddhist education at Nalanda, studied the treatises that were learned by the Buddhist intellectuals of his day, and eventually wrote works of his own that formed the core of a distinctly new school of Buddhist thought. Inasmuch as virtually every Indian philosopher after the sixth century had either to reject Dirinaga's methods or build upon the foundations provided by his investigations into logic, epistemology and language, his influence on the evolution of Indian philosophy was considerable, and indeed some familiarity with Dirinaga's arguments and conclusions is indispensable for anyone who wishes to understand the historical development of Indian thought. Moreover, since the approach to Buddhism that grew out of Dirinaga's meditations on language and the limits of knowledge dominated the minds of many of the scholars who took Buddhism to Tibet, some familiarity with Dirinaga is also essential to those who wish to understand the intellectual infrastructure of Tibetan Buddhist philosophy and practice.