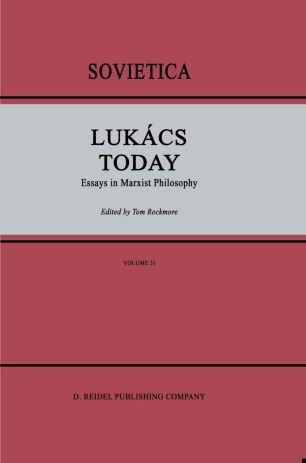 As this century nears an end, it has become increasingly clear that Georg Lukacs is one of the most ta.1ented intellectuals of our time, not only in the Marxist tradition, but in general. Lukacs' name is well­ known, and his views are increasingly attracting attention; but it cannot be said that his thought has so far been widely studied, or that it has been studied to the degree its place in the Marxist tradition warrants or its intrinsic interest demands. In the relatively short period since Lukacs' death, there have been a number of books and many articles devoted to his work. But, despite some efforts in that direction, there is still no adequate treatment of his work as a whole, surely a formidable task.! If, as I believe, Lukacs is the most important Marxist philosopher since Marx, and one of the most influential intellectual figures of this century, then surely his ideas are worth scrutinizing frequently and in detail. This is not the place to provide a general description either of Lukacs' life or of his work. Descriptions of his life, especially his early career, are widely available. For present purposes, it will suffice to provide only the barest mention of some biographical facts, together with a brief account of some items in his bibliography.