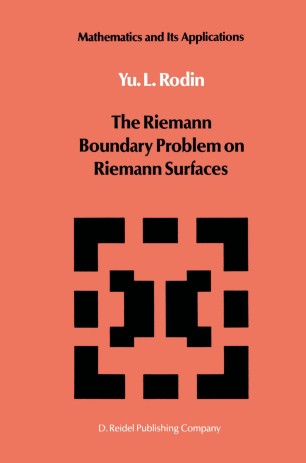 Part of the Mathematics and Its Applications book series (MASS, volume 16)

Approach your problems from the right end It isn't that they can't see the solution. It is and begin with the answers. Then one day, that they can't see the problem. perhaps you will find the final question. G. K. Chesterton. The Scandal of Father 'The Hermit Clad in Crane Feathers' in R. Brown 'The point of a Pin'. van GuIik's The Chinese Maze Murders. Growing specialization and diversification have brought a host of monographs and textbooks on increasingly specialized topics. However, the "tree" of knowledge of mathematics and related fields does not grow only by putting forth new branches. It also happens, quite often in fact, that branches which were thought to be completely disparate are suddenly seen to be related. Further, the kind and level of sophistication of mathematics applied in various sciences has changed drastically in recent years: measure theory is used (non-trivially) in regional and theoretical economics; algebraic geometry interacts with physics; the Minkowsky lemma, coding theory and the structure of water meet one another in packing and covering theory; quantum fields, crystal defects and mathematical programming profit from homotopy theory; Lie algebras are relevant to filtering; and prediction and electrical engineering can use Stein spaces. And in addition to this there are such new emerging subdisciplines as "experimental mathematics", "CFD", "completely integrable systems", "chaos, synergetics and large-scale order", which are almost impossible to fit into the existing classification schemes. They draw upon widely different sections of mathematics.

`This valuable book characterized by an original point of view in both choice and organization of the material, will be much appropriated by mathematicians and physicists and will favourably influence the future researchers.'
Zentralblatt für Mathematik, 695