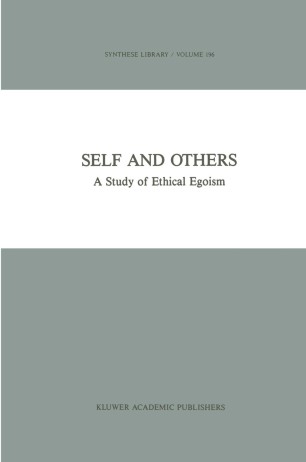 A Study of Ethical Egoism

1. The Aim of This Essay Ethical Egoism, the doctrine that, roughly speaking, one should promote one's own good, has been a live issue since the very beginnings of moral philosophy. Historically, it is the most widely held normative theory, and, next to Utilitarianism, it is the most intensely debated one. What is at stake in this debate is a fundamental question of ethics: 'Is there any reason, except self-interest, for considering the interests of other people?' The ethical egoist answers No to this question, thus rejecting the received conception of morality. Is Ethical Egoism an acceptable position? There are many forms of Ethical Egoism, and each may be interpreted in several different ways. So the relevant question is rather, 'Is there an acceptable version of Ethical It is the main aim of this essay to answer this question. This Egoism?' means that I will be confronted with many other controversial questions, for example, 'What is a moral principle?', 'Is value objective or subjec­ tive?', 'What is the nature of the self?' For the acceptability of most ver­ sions of Ethical Egoism, it has been alleged, depends on what answers are given to questions such as these. (I will show that in some of these cases there is in fact no such dependence. ) It is, of course, impossible to ad­ equately discuss all these questions within the compass of my essay.