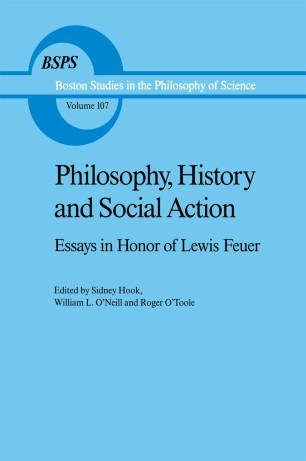 Part of the Boston Studies in the Philosophy of Science book series (BSPS, volume 107)

Two articles by Lewis Feuer caught my attention in the '40s when 1 was wondering, asa student physicist, about the relations of physics to philosophy and to the world in turmoil. One was his essay on 'The Development of Logical Empiricism' (1941), and the other his critical review of Philipp Frank's biography of Einstein, 'Philosophy and the Theory of Relativity' (1947). How extraordinary it was to find so intelligent, independent, critical, and humane a mind; and furthermore he went further, as I soon realized when I looked for his name on other publications. I recall arguing with myself over his exploration of 'Indeterminacy and Economic Development' (1948), and even more when I read his 'Dialectical Materialism and Soviet Science' (1949). More papers, and then the fascinating, sometimes irritating, always insightful, books. His monograph on Psychoanalysis and Ethics 1955, the beautiful sociological and humanist study of Spinoza and the Rise of Liberalism (1958), his essays on 'The Social Roots of Einstein's Theory of Relativity' (1971) together with the book on Einstein and the Genera­ tions of Science (1974), the splendid reader from the works of Marx and Engels, Basic Writings on Politics and Philosophy (1959) which was a major text of the '60s, the stimulating essays on the social formation which seems to have been required for a modern scientific movement to develop, set forth most convincingly in The Scientific Intellectual (1963).