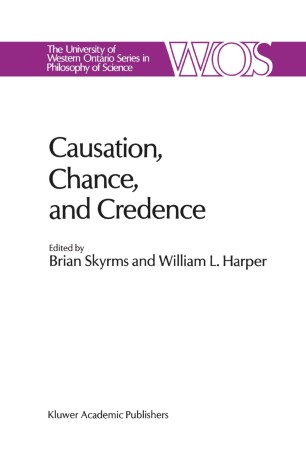 Proceedings of the Irvine Conference on Probability and Causation Volume 1

Part of the The University of Western Ontario Series in Philosophy of Science book series (WONS, volume 41)

The papers collected here are, with three exceptions, those presented at a conference on probability and causation held at the University of California at Irvine on July 15-19, 1985. The exceptions are that David Freedman and Abner Shimony were not able to contribute the papers that they presented to this volume, and that Clark Glymour who was not able to attend the conference did contribute a paper. We would like to thank the National Science Foundation and the School of Humanities of the University of California at Irvine for generous support. WILLIAM HARPER University of Western Ontario BRIAN SKYRMS University of California at Irvine VII INTRODUCTION TO CAUSATION, CHANCE, AND CREDENCE The search for causes is so central to science that it has sometimes been taken as the defining attribute of the scientific enterprise. Yet even after twenty-five centuries of philosophical analysis the meaning of "cause" is still a matter of controversy, among scientists as well as philosophers. Part of the problem is that the servicable concepts of causation built out of Necessity, Sufficiency, Locality, and Temporal Precedence were constructed for a deterministic world-view which has been obsolete since the advent of quantum theory. A physically credible theory of causation must be, at basis, statistical. And statistical analyses of caus­ ation may be of interest even when an underlying deterministic theory is assumed, as in classical statistical mechanics.