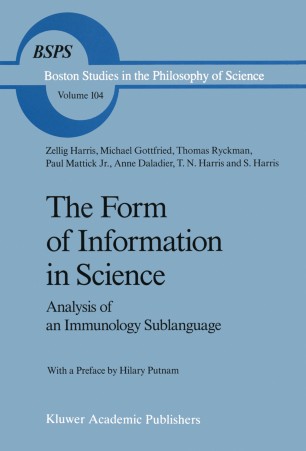 The Form of Information in Science

Analysis of an Immunology Sublanguage

Part of the Boston Studies in the Philosophy of Science book series (BSPS, volume 104)

DOES DISCOURSE HAVE A 'STRUCTURE'? HARRIS'S REVOLUTION IN LINGUISTICS As a freshman back in 1947 I discovered that within the various academic divisions and subdivisions of the University of Pennsylvania there existed a something (it was not a Department, but a piece of the Anthropology Department) called 'Linguistic Analysis'. I was an untalented but enthusiastic student of Greek and a slightly more talented student of German, as well as the son of a translator, so the idea of 'Linguistic Analysis' attracted me, sight unseen, and I signed up for a course. It turned out that 'Linguistic Analysis' was essentially a graduate program - I and another undergraduate called Noam Chomsky were the only two undergraduates who took courses in Linguistic Analysis - and also that it was essentially a one-man show: a professor named Zellig Harris taught all the courses with the aid of graduate Teaching Fellows (and possibly - I am not sure - one Assistant Professor). The technicalities of Linguistic Analysis were formidable, and I never did master them all. But the powerful intellect and personality of Zellig Harris drew me like a lodestone, and, although I majored in Philosophy, I took every course there was to take in Linguistic Analysis from then until my gradua­ tion. What 'Linguistics' was like before Zellig Harris is something not many people care to remember today.