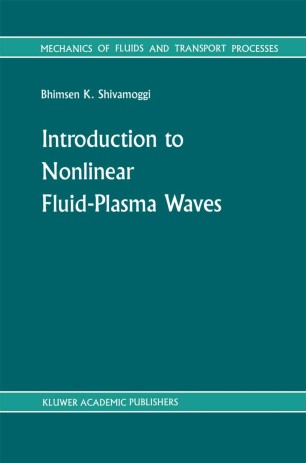 Part of the Mechanics of Fluids and Transport Processes book series (MFTP, volume 8)

A variety of nonlinear effects occur in a plasma. First, there are the wave­ steepening effects which can occur in any fluid in which the propagation speed depends upon the wave-amplitude. In a dispersive medium this can lead to classes of nonlinear waves which may have stationary solutions like solitons and shocks. Because the plasma also acts like an inherently nonlinear dielectric resonant interactions among waves lead to exchange of energy among them. Further, an electromagnetic wave interacting with a plasma may parametrically excite other waves in the plasma. A large-amplitude Langmuir wave undergoes a modulational instability which arises through local depressions in plasma density and the corresponding increases in the energy density of the wave electric field. Whereas a field collapse occurs in two and three dimensions, in a one-dimensional case, spatially localized stationary field structures called Langmuir solitons can result. Many other plasma waves like upper-hybrid waves, lower-hybrid waves etc. can also undergo a modulational instability and produce localized field structures. A new type of nonlinear effect comes into play when an electromagnetic wave propagating through a plasma is strong enough to drive the electrons to relativistic speeds. This leads to a propagation of an electromagnetic wave in a normally overdense plasma, and the coupling of the electromagnetic wave to a Langmuir wave in the plasma. The relativistic mass variation of the electrons moving in an intense electromagnetic wave can also lead to a modulational instability of the latter.