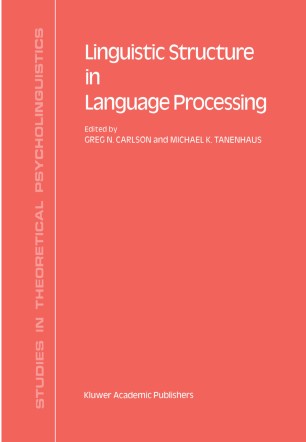 The papers in this volume are intended to exemplify the state of experimental psycho linguistics in the middle to later 1980s. Our over­ riding impression is that the field has come a long way since the earlier work of the 1950s and 1960s, and that the field has emerged with a renewed strength from a difficult period in the 1970s. Not only are the theoretical issues more sharply defined and integrated with existing issues from other domains ("modularity" being one such example), but the experimental techniques employed are much more sophisticated, thanks to the work of numerous psychologists not necessarily interested in psycholinguistics, and thanks to improving technologies unavailable a few years ago (for instance, eye-trackers). We selected papers that provide a coherent, overall picture of existing techniques and issues. The volume is organized much as one might organize an introductory linguistics course - beginning with sound and working "up" to mean­ ing. Indeed, the first paper, Rebecca Treiman's, begins with considera­ tion of syllable structure, a phonological consideration, and the last, Alan Garnham's, exemplifies some work on the interpretation of pro­ nouns, a semantic matter. In between are found works concentrating on morphemes, lexical structures, and syntax. The cross-section represented in this volume is by necessity incom­ plete, since we focus only on experimental work directed at under­ standing how adults comprehend and produce language. We do not include any works on language acquisition, first or second.