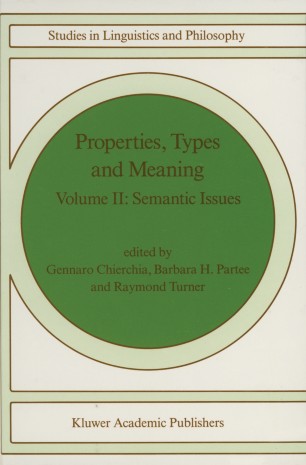 Part of the Studies in Linguistics and Philosophy book series (SLAP, volume 39)

This collection of papers stems originally from a conference on Property Theory, Type Theory and Semantics held in Amherst on March 13-16 1986. The conference brought together logicians, philosophers, com­ puter scientists and linguists who had been working on these issues (of ten in isolation from one another). Our intent was to boost debate and exchange of ideas on these fundamental issues at a time of rapid change in semantics and cognitive science. The papers published in this work have evolved substantially since their original presentation at the conference. Given their scope, we thought it convenient to divide the work into two volumes. The first deals primarily with logical and philosophical foundations, the second with more empirical semantic issues. While there is a common set of issues tying the two volumes together, they are both self-contained and can be read independently of one another. Two of the papers in the present collection (van Benthem in volume 1 and Chierchia in volume II) were not actually read at the conference. They are nevertheless included here for their direct relevance to the topics of the volumes. Regrettably, some of the papers that were presented (Feferman, Klein, and Plotkin) could not be included in the present work due to timing problems. We nevertheless thank the authors for their contribu­ tion in terms of ideas and participation in the debate.