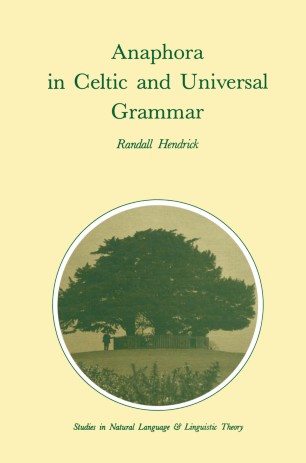 Anaphora in Celtic and Universal Grammar

This book is based in large part on fieldwork that I conducted in Brittany and Wales in 1983 and 1985. I am thankful for a Fulbright Award for Research in Western Europe and a Faculty Development Award from the University of North Carolina that funded that fieldwork. lowe a less tangible, but no less real, debt to Steve Anderson, G. M. Awbery, Steve Harlow and Jim McCloskey whose work initially sparked my interest, and led me to undertake this project. I want to thank Joe Emonds and Alec Marantz who read portions of Chapter 3 and 5. I am particularly grateful though to Kathleen Flanagan, Frank Heny and two anonymous referees who read a dyslexic and schizophrenic manuscript, providing me with criticisms that improved this final version considerably. The Welsh nationalist community in Aberstwyth and its Breton coun­ terpart in Quimper helped make the time I spent in Wales and Brittany productive. I am indebted to Thomas Davies, Partick Favreau, Lukian Kergoat, Sue Rhys, John Williams and Beatrice among others for sharing their knowledge of their languages with me. Catrin Davies and Martial Menard were especially patient and helpful. Without their assistance this work would have been infinitely poorer. I am hopeful that this book will help stimulate more interest in the Celtic languages and culture, and assist, even in a small way, those in Wales and Brittany who struggle to keep their language and culture strong.