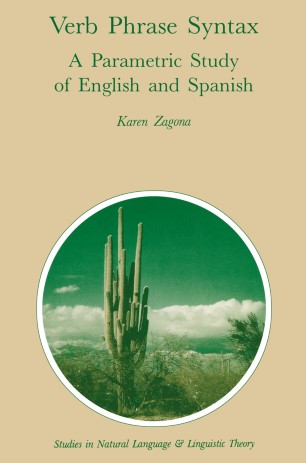 Verb Phrase Syntax: A Parametric Study of English and Spanish

A Parametric Study of English and Spanish

This study is concerned with the structure of verb phrases in English and Spanish, and with syntactic processes involving VP and Vo. A primary focus of attention is auxiliary verbs. It is argued that the structure dominating these verbs is essentially the same in English and Spanish, as is the structure dominating auxiliaries and 'main' verbs in each language. It must be concluded that the occurrence of distinct syntactic processes affecting auxiliaries and other VP constituents in the two languages does not follow from parametrization of phrase structure. It is argued that similarities between the two languages with respect to the composition of so-called "V*" constructions derive from the fact that VP is licensed under both clauses of the Principle of Full Interpretation, i. e. , predication and sub categorization. Distinct syntactic processes in English and Spanish are argued to follow from the fact that there are inflectional features related to each of these licensing conditions (including specification for [ ± PAST) and nominal person/number features) which affect government relations in distinct ways, resulting in parametrization of S-structure representa­ tions. xi ACKNOWLEDGMENTS I wish to express my appreCiatIOn to the Department of Romance Languages at the University of Washington for support for preparation of the final manuscript, and to the Department of Spanish, Italian and Portuguese at the University of Virginia for a leave during which much of this research was accomplished.