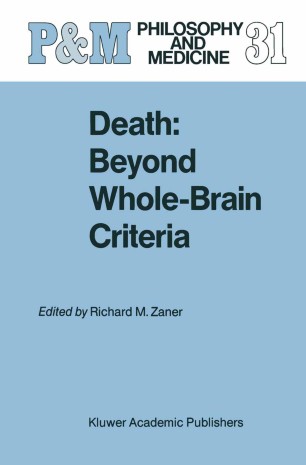 Part of the Philosophy and Medicine book series (PHME, volume 31)

From the tone of the report by the President's Commission for the Study of Ethical Problems in Medicine and Biomedical and Behavioral Re­ search, one might conclude that the whole-brain-oriented definition of death is now firmly established as an enduring element of public policy. In that report, Defining Death: Medical, Legal and Ethical Issues in the Determination of Death, the President's Commission forwarded a uni­ form determination of death act, which laid heavy accent on the signifi­ cance of the brain stem in determining whether an individual is alive or dead: An individual who has sustained either (1) irreversible cessation of circulatory and respiratory functions, or (2) irreversible cessation of all functions of the entire brain, including the brain stem, is dead. A determination of death must be made in accordance with accepted medical standards ([1], p. 2). The plausibility of these criteria is undermined as soon as one confronts the question of the level of treatment that ought to be provided to human bodies that have permanently lost consciousness but whose brain stems are still functioning.