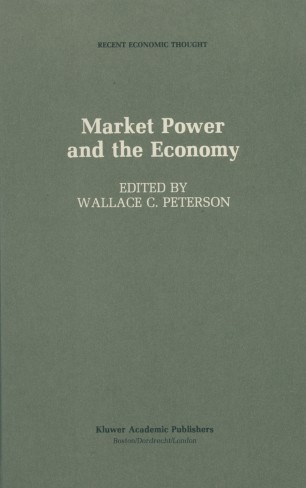 Market Power and the Economy

A situation in economics that is little short of scandalous is the almost total neglect by mainstream economics of the importance of power in economic affairs. Power in this context means the ability to bend market forces in one's favor, influencing and shaping key economic variables such as prices, wages, and other income determinants. As John Kenneth Galbraith as­ tutely observes: a dominant fact in economic life is the desire of people everywhere and in all circumstances to get control over their personal lives and their incomes-to escape from the "tyranny of the market. " Power is the means to this end. Ever since Adam Smith, economists have been fascinated by and lavish in their praise for the workings of the market. All modern textbooks are built around Smithian ideas about markets and the way the "invisible hand" works through competition for society's better­ ment. Yet one can search nearly in vain through leading texts, under­ graduate and graduate alike, for any reference to market or economic power. This is the situation in spite of the fact that the drive for power, the urge to get control over one's income, permeates the economy as much as does competition. This is a scandal! For a discipline that claims for itself the mantle of a science-one which wants to be accorded the same respect given the natural sciences-it is almost incomprehensible that it should ignore a major force at work in the real economic world.