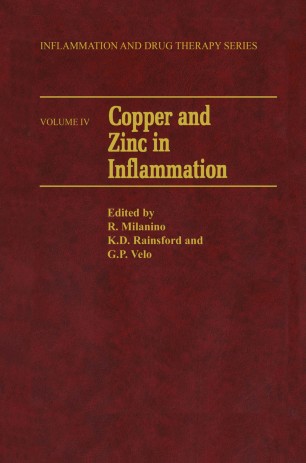 Copper and Zinc in Inflammation

The role of trace metals, especially copper and zinc, in the pathogenesis of rheumatic conditions has continued to receive much interest following the initial upsurge of research activity in the 1970s. Meantime also copper and zinc complexes receive continued attention for their potential anti-inflam­ matory actions. Since the previous major titles were published in this field some years ago (e. g. 1,2) it was considered timely to consider progress which has been made in the interceding period. Thus in this volume aspects are re­ viewed of the metabolism and biodisposition of copper and zinc, especially as they may be influenced by inflammatory processes, the mode of action of copper and zinc compounds in inflammatory states, and the actions of some newer copper complexes. While we still understand relatively little about how copper and zinc complexes work in inflammation, and indeed what the fate of the ligands and their complexed ions is in inflammation, it is hoped that this volume will be useful for giving a current view of the "state of art" in the field. Special thanks are given to the valued efforts of the contributors, Dr Peter Clarke (Publishing Director, Kluwer Academic Publishers) and Mrs Veronica Rainsford-Koechli for her help in proof-reading the manuscripts. K D Rainsford Hamilton, Ontario, Canada February 1989 References 1. Rainsford, K. D. , Brune, K. and Whitehouse, M. W. (eds) (1981). Elements in the pathogenesis a treatment of inflammation.