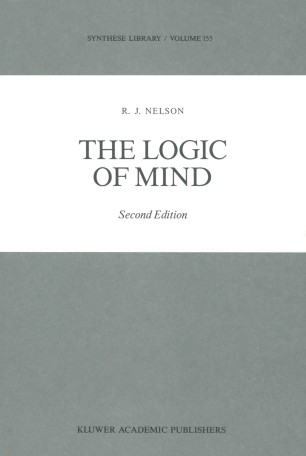 The Logic of Mind

This book presents a mechanist philosophy of mind. I hold that the human mind is a system of computational or recursive rules that are embodied in the nervous system; that the material presence of these rules accounts for perception, conception, speech, belief, desire, intentional acts, and other forms of intelligence. In this edition I have retained the whole of the fIrst edition except for discussion of issues which no longer are relevant in philosophy of mind and cognitive psychology. Earlier reference to disputes of the 1960's and 70's between hard-line empiricists and neorationalists over the psychological status of grammars and language acquisition, for instance, has simply been dropped. In place of such material I have entered some timely or new topics and a few changes. There are brief references to the question of computer versus distributed processing (connectionist) theories. Many of these questions dissolve if one distinguishes as I now do in Chapter II between free and embodied algorithms. I have also added to my comments on artifIcal in­ telligence some reflections. on Searle's Chinese Translator. The irreducibility of machine functionalist psychology in my version or any other has been exaggerated. Input, output, and state entities are token identical to physical or biological things of some sort, while a machine system as a collection of recursive rules is type identical to representatives of equivalence classes. This nuld technicality emerges in Chapter XI. It entails that so-called "anomalous monism" is right in one sense and wrong in another.

Reviews of the First Edition: `For Nelson, it is not enough to say people are computers and that mental processes are computational processes; one must also specify the kind of machine or automaton a person is. Nelson does just this.
... The striking fact about Nelson's book is simply that someone has finally put forth a detailed and theoretically sophisticated version of mechanism.'
Computational Linguistics
`The Logic of Mind offers novel and provation answers to a number of important problems in philosophy of mind. It deserves to be widely read.'
The Philosophical Review
`Overall, The Logic of Mind is a thought-provoking argument for the thesis that humans are automata.'
Contemporary Psychology
` ... is an excellent book written by a first-rate philosopher. It defends a version of mechanism, more specifically the thesis that humans are `non-deterministic finite automata'. ... The book is worth reading: it tours widely around not only the philosophy of psychology and mind, but much contemporary epistemology, philosophy of language, mathematics and logic as well.'
Australian Journal of Philosophy `The Logic of Mind represents one of the fullest and most probing detailed available accounts of the outline of a computational theory of mind. It is no mere rhetoric on the possibility or desirability of such an enterprise.'
Philosophical Psychology, 4 (1) 1991
Buy options