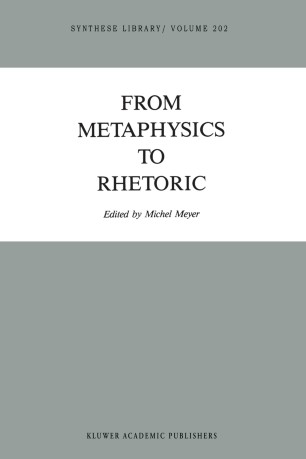 From Metaphysics to Rhetoric

by the question in its being an answer, if only in a circumstantial (i. e. inessential) manner. One indeed must question oneself in order to remember, says Plato, but the dialectic, which would be scientific, must be something else even if it remains a play of question and answer. This contradiction did not escape Aristotle: he split the scientific from the dialectic and logic from argumentation whose respective theories he was led to conceive in order to clearly define their boundaries and specificities. As for Plato, he found in the famous theory of Ideas what he sought in order to justify knowledge as that which is supposed to hold its truth only from itself. What do Ideas mean within the framework of our approach? In what consists the passage from rhetoric to ontology which leads to the denaturation of argumentation? When Socrates asked, for example, "What is virtue?", he thought one could not answer such a question because the answer refers to a single proposition, a single truth, whereas the formulation of the question itself does not indicate this unicity. For any answer, another can be given and thus continuously, if necessary, until eventually one will come across an incompatibility. Now, to a question as to what X, Y, or Z is, one can answer in many ways and nothing in the question itself prohibits multiplicity. Virtue is courage, is justice, and so on.