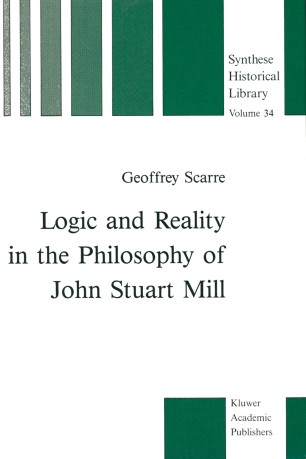 Logic and Reality in the Philosophy of John Stuart Mill

'Nobody reads Mill today,' wrote a reviewer in Time magazine a few years ago. ! One could scarcely praise Mr Melvin Maddocks, who penned that remark, for his awareness of the present state of Mill studies, for of all nineteenth century philosophers who wrote in English, it is 1. S. Mill who remains the most read today. Yet it would not be so far from the truth to say that very few people pay much serious attention nowadays to Mill's writings about logic and metaphysics (as distinct from those on ethical and social issues), despite the fact that Mill put enormous effort into their composition and through them exerted a considerable influen­ ce on the course of European philosophy for the rest of his century. But the only sections of A System of Logic (1843) and An Examination of Sir William Hamilton's Philosophy (1865) to which much reference is now made comprise only a small proportion of those very large books, and the prevailing assumption is that Mill's theories about logical and meta­ physical questions are, with few exceptions, of merely antiquarian in­ terest. Bertrand Russell once said that Mill's misfortune was to be born at the wrong time (Russell (1951), p. 2). It can certainly appear that Mill chose an inauspicious time to attempt a major work on logic.